Keep the faith, the most amazing things in life tend to happen right at the moment you’re about to give up hope… 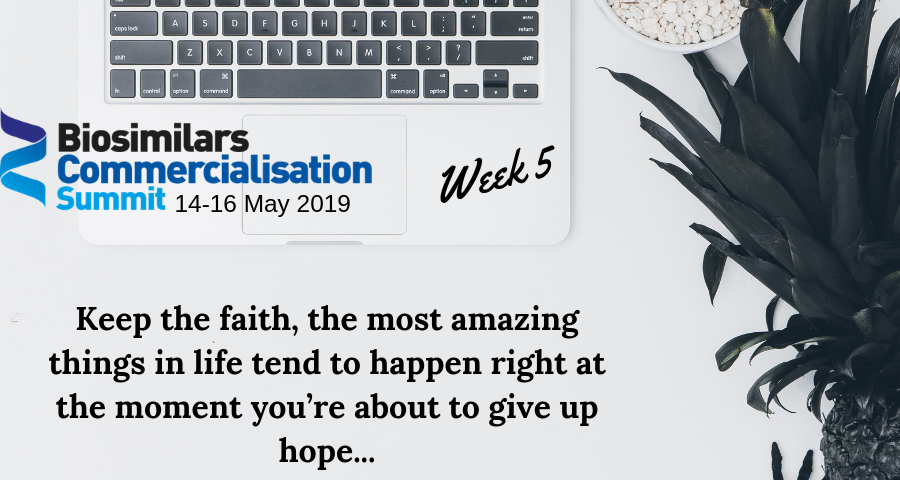 “Keep the faith, the most amazing things in life tend to happen right at the moment you’re about to give up hope…”

The internet is awash with inspirational quotes, often attributed to people who have never uttered such words. As the title of this post suggests, one of my favourites concerns not giving up on things before you’ve seen the benefits; learning a new language, getting fit, dropping a golf handicap, learning how to make bread. It could be anything, but unless you give it sufficient time and energy, you’ll very rarely see a result.

This is why I was stunned (and amazed, in equal measure) to read comments from Peter Bach and Mark Trusheim (of MIT Sloan), along with two of Bach’s associates at the Memorial Sloan Kettering Cancer Center in the US, Preston Atteberry and Jennifer Ohn, suggesting that the US should give up on biosimilars.

In the first part of a blog post in the Health Affairs journal, the key message from Bach and colleagues is that the use of biosimilars in the US is a ‘flawed’ approach that has ‘largely failed’ at increasing competition and lowering prices within the US biologics market.

It would seem that the key reason for this is that only a handful of biosimilars have been launched in the US, thereby limiting the level of competition and price reductions. Biosimilars launched in the US include Zarxio (Sandoz), Inflectra (Pfizer), Renflexis (Merck & Co.), Retacrit (Pfizer), Nivestym (Pfizer), Udenyca (Coherus) and Fulphila (Mylan). As a result, in many classes where there has been a biosimilar launched in the US, the originator’s reference brand has retained the vast majority of the market. The outlier is Zarxio which now has a larger market share than Neupogen, according to comments from Sandoz.

In the second part of the blog post, Bach and colleagues suggest that a ‘regulatory approach’ would be more effective at reining in biologics’ costs in the US. This approach could eventually generate net savings of $250-$300 billion while incurring one-time costs of $10-$20 billion over five years. These estimates are based on ‘the current 12-year exclusivity period and an assumption that discounts approach the traditional generic discounts of 70-90 percent,’ while the one-time costs go toward compensating biosimilar firms.

Critically, the policy would require innovator biologic manufacturers to lower their prices after the period of market exclusivity has expired. While the post says this price would be set by an independent body that takes into account a number of variables, it doesn’t say that this price adjustment would be mandatory, raising concerns that innovator biologic manufacturers could use various tactics to manoeuvre around it.

Perhaps one of the most high-profile critics of this suggestion is former FDA commissioner, Scott Gottlieb. During his tenure at the FDA, Gottlieb was a staunch advocate of a thriving and sustainable biosimilars market in the US. The FDA’s Biosimilars Action Plan, announced in July 2018, was one of Gottlieb’s attempts to support the biosimilars in the US, due to them being seen as ‘key to reducing costs and to facilitating more innovation.’

In a tweet, Gottlieb said ‘it’s far too early to throw in the towel on biosimilars.’ Christine Simmon, executive director of the Biosimilars Council, went even further and accused  Bach and his colleagues of ‘tossing out the baby with the bath water.’ Simmon added ‘marketed biosimilars currently average 47% off the brand biologics’ price, providing access and savings for patients and the US health care system’.

One must understand, however, that the US and Europe are very different in terms of procurement policies for biologics and biosimilars, as are the incentives that are in place to use the lower-priced (often biosimilar) product. Once such commercial barrier to the adoption of biosimilars in the US is the ‘rebate trap,’ an issue that Gottlieb has been highly critical of in the past. While drug rebates do exist in Europe, they are not seen as  significant a barrier to the uptake of biosimilars as they are in the US.