What next for biosimilars? Five key questions… 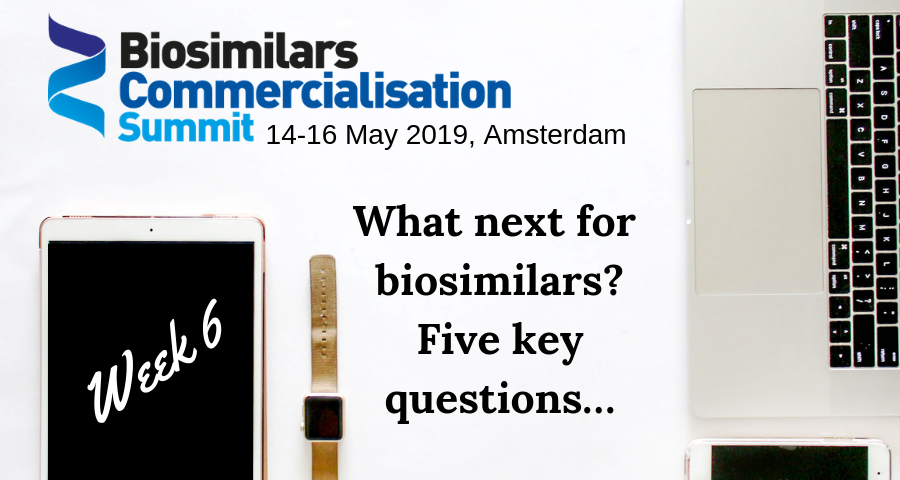 Following the launch of Humira biosimilars in Europe in 2018, and seeing their adoption outpace the adoption of previous biosimilars launched in Europe, the question now becomes; what next? Now that Humira biosimilars are here, in Europe at least, it’s perhaps time to think about where the biosimilars market is headed and ask what we can expect in terms of challenges, opportunities and market evolution.

Will procurement policies become more sustainable in the future?

Aggressive discounting has been a highly successful tactic in driving biosimilar adoption in Europe. Take the discount offered by Orion Pharma in Norway, when they offered a discount of over 70%. This set the benchmark. Deep discounting became the new normal. For Humira biosimilars, NHS England took the lead on procurement and implemented a unique strategy which focused on two key objectives; plurality and best price. A key driver of this innovative strategy was a desire to create a sustainable market for Humira biosimilars and not just focus on the lowest cost product. Looking to the future it remains to be if other countries adopt the same sustainable approach. As Warwick Smith, director general of the British Biosimilars Association (BBA), said at Medicines for Europe’s annual biosimilars conference in Amsterdam (March 2019), “There was a recognition that we need a competitive system, not a race to the bottom where the lowest-price manufacturer takes everything. There has been a learning that if you just drive competition on price, it eventually drives out competition.”

How will the US biosimilars market evolve over the coming years?

The US has been called a failed biosimilars market due to the poor biosimilar adoption rates seen thus far. Certain stakeholders have called for the US to give up on biosimilars and instead focus on regulating originator drug prices after patents and other market exclusivities have expired. There is also the challenge from the Trump administration which believes that the Affordable Care Act (ACA) should be struck down in the courts, thereby preventing the US Food and Drug Administration (FDA) from approving any biosimilars via the 351(k) pathway, which is a key component of the ACA. Within the FDA there are also challenges related to the finalisation of its interchangeable biosimilars guideline. Outside of these challenges, the US has some big biosimilar launches to look forward to. In 2023 a slew of Humira biosimilars are set to come to market following AbbVie settling with a number of Humira biosimilar developers, including Sandoz and Pfizer. Then in 2029 (or sooner, depending on the outcome of a law suit between Amgen and Sandoz), a number of Enbrel biosimilars can come to market, including Eticovo (Samsung Bioepis) and Erelzi (Sandoz).

What bets are biosimilar companies making on the next wave of biosimilar opportunities?

Notwithstanding the big biosimilar launches expected in the US over the next decade, the second wave of biosimilar launches is reaching its climax. In many countries around the world we now have biosimilar versions of Remicade, Enbrel, Rituxan/MabThera, Herceptin and Humira. Biosimilar versions of Avastin are also expected to be launched in the next 12-18 months following the expiry of Avastin’s key patent (2020 in Europe and the US).  All eyes are now on the next wave of biosimilar opportunities. Those branded biologics which lose patent protection in key markets beyond 2020. These include checkpoint inhibitors, such as Keytruda (pembrolizumab; Merck & Co.), which are used in the treatment of various cancers; anti-interleukins, such as Stelara (ustekinumab ) and Cosentyx (secukinumab; Novartis), which are used to treat psoriasis; and anti-VEGFs, such as Lucentis (ranibizumab; Roche/Novartis) and Eylea (aflibercept; Sanofi/Regeneron), used to treat various ophthalmological conditions. There is also a significant amount of interest in developing biosimilars of orphan drugs following Generium Pharmaceuticals obtaining Russian approval for its biosimilar version of Soliris (eculizumab; Alexion). In terms of anti-interleukin and ophthalmological biosimilars, German biosimilars company Formycon has invested in both areas. In May 2017 the company announced that it was developing a biosimilar version of Stelara. Progress is also being made on ranibizumab and aflibercept biosimilars.

What tactics – commercial or developmental – will companies focus on in the future?

Ultimately the tactics a biosimilar company selects can be boiled down to ones that either focus on enhancing the brand at its most basic level (i.e. its clinical profile) or improving the commercial proposition of the brand. Fundamentally the mix of commercial and developmental tactics which companies decide to implement as part of a biosimilar brand’s commercialisation strategy need to be customized to the type of product being developed, its target indication, patient type and the country in which the product is to be sold. Similar to the development of a biosimilar, there can be no ‘one size fits all’ commercial strategy. Commercial tactics tend to be quicker, cheaper and more responsive to market change compared to developmental tactics, but the overall aim of both approaches is the same; to drive differentiation in the eyes of end-users, such as patients, physicians and payers, so that the company’s biosimilar is used preferentially ahead of other options.