26 - 28 January, 2021 | Dusseldorf, Germany
View the 2020 agenda
Sponsor
Secure your place
The speaker Major Chris Hunter was part of the previous event. To review the most recent speakers list, click here. 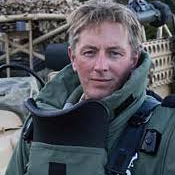 Chris joined the British Army at sixteen and within three years was selected to undergo officer training at the Royal Military Academy Sandhurst.

Chris spent the majority of his 17 year career serving as a high threat bomb disposal operator and during that time served with a variety of specialist counter terrorism units. These included four years with the UK Special Forces and an attachment to the Security Service (MI5).

During his career he deployed to a number of operational theatres, and for his actions during an Iraq bomb disposal tour, he was awarded the Queen’s Gallantry Medal. His citation read: ‘There can be few other individuals who have so willingly played Russian roulette with their own life to safeguard the lives of others’.

Chris ended his military career working as an intelligence officer, and since retiring from the army has embarked on a successful career as a counter-terrorism specialist, businessman, author, motivational speaker and broadcaster. He has written two Sunday Times Bestsellers; has presented the Military History Channel’s acclaimed Bomb Hunters documentary; and is a regular contributor to television and radio news and current affairs programmes. He was listed as one of the ‘Top Five Inspirational Speakers’ of both 2011 and 2012 by the JLA Speakers Agency and in 2012 he was selected to be one of 15 Ambassadors for Prime Minister David Cameron’s youth development initiative – the National Citizen Service.

By capitalising on his unique experiences in the high-pressure, high stakes world of bomb disposal and intelligence as well as four years attached to the British special forces, Chris has been able to develop the skills, psychologies and life-or-death decision-making processes learned in his former career, and translates them to the current needs of the commercial world. The result is a compelling and highly-rewarding experience, offering businesses and organisations a range of unique and alternative methods for taking calculated risks, developing teams and dealing with extreme pressure in every aspect of life.

Check out the incredible speaker line-up to see who will be joining Chris.

The browser you are using is not supported that will prevent you from accessing certain features of the website. We want you to have the best possible experience. For this you'll need to use a supported browser and upgrade to the latest version.